The Relaxation of a Cigar While I don't advocate young to smoke, it would be a lie to say I don't enjoy a good cigar.


Like many young men, I tried my first cigar in college. But in truth, I smoked more weed than I did cigars. Then nothing for twenty years.

I was when I began to play poker seriously that I began smoking cigars seriously too -- while living in Buenos Aires. Back then (2003-2010) smoking was still allowed in the casino there, and I would take one each day when I went to play.

Cigars from Cuba are sold there, and I quickly settled in on Cohiba and Romeo & Juliet. However, when I am back in the States, Cubans are illegal, so I had to search out other options.

In New York, you can no longer smoke in parks or outdoor cafes, so most of the times I frequented these cigar locations:

ON THE EAST SIDE 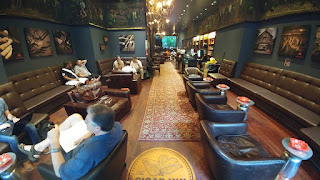 Montecristo Cigar Inn. Nice friendly place with good humidor selection of cigars, where you can BYO liquor (they'll provide glasses/ice and chiller, or food. They do serve soft drinks and coffee in-house. Inexpensive house blends start at $7, and well-known brands like Montichristo, Padron, Davidoff, and others can also be gotten here.


ON THE WEST SIDE

The Carnegie Club. A little more upscale and quieter for business meetings or getting together with friends. They have cigar selection from their menu, as well as food and drinks. 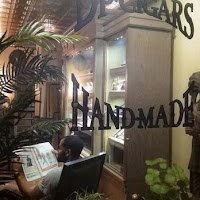 DP Cigars. This small lounge has it's own grown and rolled Dominican selection ranging from $4 to $10, with a sitting area of a couch and 2 chairs in one selection, and 2 chairs in the other.

For everyone else, and even those in NYC, you can also buy online for home delivery here Posted by thoughtsofaceo at 2:32 PM